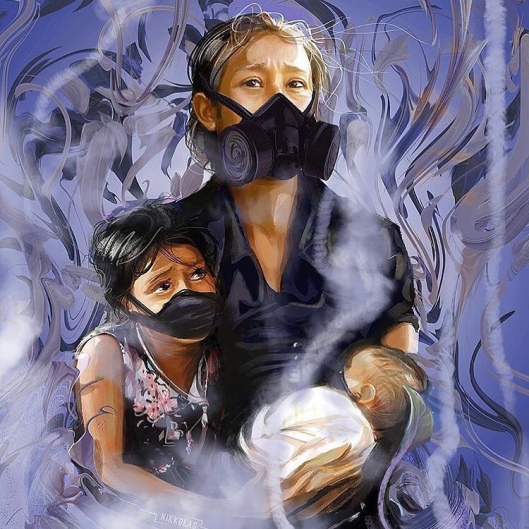 I wrote the following, last May, as part of a speculative fiction piece.

The Summer of 2018 begins with blistering heat waves and thousands of refugees forcibly reopening the land route through the Balkans and Greece; the restart of the migrant caravans on both sides of the U.S.-Mexico border; and, a deepening of militant memorials to the Nakba. With these signature developments the three great movements of people in the global south begin to coalesce.

Slogans of ‘Family Reunification First’, ‘We Are All Refugees’, ‘On Demand Housing’ and ‘No More Work, So You Can Play’ begin to be shouted by wild-eyed subversives from makeshift pulpits.”

“Here, it seems, framing the right of movement in terms of fundamental human rights and survival begins to outstrip notions of charity, for which one is expected to be grateful, and access, which must be earned.”

ICE raids in the U.S. begin to be met by unruly crowds of mothers and children. Street gangs begin targeting enforcement agents. An ICE picnic in a Texas park, replete with silhouettes of sprinting ‘illegals’ that participants shoot with paint guns, is demolished by protesters.

While my timeline may be a bit off, such fervid speculation has not been entirely off base.

The group breezed by the blockade, carrying hand-painted Honduran and American flags and chanting, “We are not criminals! We are international workers!”

“Singing ‘Amazing Grace,’ a church surrounded an ICE van to stop an arrest. 27 were jailed.

And from a post on my webpage Mozzochi.wordpress.com from a few weeks ago:

Finally, from the NYT

“But Mr. Trump’s dystopian imagery has clearly left an impression with some. Carol Shields, 75, a Republican in northern Minnesota, said she was afraid that migrant gangs could take over people’s summer lake homes in the state.

“What’s to stop them?” said Ms. Shields, a retired accountant. “We have a lot of people who live on lakes in the summer and winter someplace else. When they come back in the spring, their house would be occupied.”

My response, from the film Almost Mercy:

One day we will look upon these fortresses as so much concrete and steel that had to yield to the far more powerful force of human freedom. Walls are never a guarantor of freedom, but a singular impediment to that freedom.

Tales of humour, whimsy and courgettes