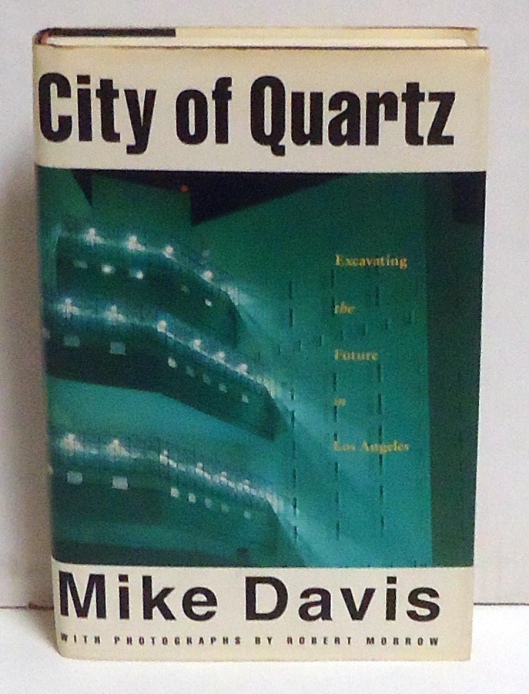 “The Lesser Evil? The Left And The Democratic Party” New Left Review No. 155 January-February 1986.

I first read Mike Davis’ City Of Quartz: Excavating The Future In Los Angeles in 1990 when it was first published. While I was born in Los Angeles, I have never called it home. All the same, whenever I feel adrift politically, I can always regain my moorings through Mike Davis. Perhaps someone in Democratic Socialists of America, around the time Bernie Sanders was sandbagged on stage in Seattle by Black Lives Matter activists, could have benefitted from a close reading of the above. Perhaps someone still could.

“Although its significance was only vaguely grasped at the time, this increasing polarization between workerism and electoralism coincided with, and was immediately conditioned by, the decline of the Black liberation movement that had been the chief social motor of post-war radicalism. A dismaying, inverse law seemed to prevail between the collapse of grassroots mobilization in the ghettoes and the rise of the first wave of Black political patronage in the inner cities. While Black revolutionaries and nationalists were being decimated by J. Edgar Hoover’s cointelpro  programme of preemptive repression and infiltration, Black community organization was being reshaped into a passive clientelism manipulated by the human-services bureaucracy and the Democratic Party. Although the civil rights movement remained an unfinished revolution with an urgent agenda of economic and political demands, its centrality to the project of a popular American left was tragically, and irresponsibly, obscured in the late 1970s. The ranks of the white, ex-student left, preoccupied with academic outposts and intellectual celebrities, showed a profound inability to understand the strategic implications of the halting of the civil rights movement. For all the theoretical white smoke of the 1970s, including the endless debates on crisis theory and the nature of the state, the decisive problem of the fate of the Second Reconstruction was displaced beyond the field of vision. With minimal challenge or debate, leading journals like Socialist Review and Dissent tacitly demoted Black liberation—the critical democratic issue in American history—to the status of another progressive ‘interest’, coeval with sexual freedom or ecology.”

“But it is unlikely that the transition towards the orbit of the Democratic Party could have occurred so rapidly without the intervention and coordination undertaken by the Harrington–Howe group, now reorganized as the Democratic Socialist Organizing Committee (dsoc). The charter concept of dsoc, according to a Harrington editorial written in the wake of the McGovern defeat, was the belief that ‘the left wing of realism is found today in the Democratic Party. It is there that the mass forces for social change are assembled; it is there that the possibility exists for creating a new first party in America.”

I think that’s what Bernie Sanders has been saying for almost fifty years. As the tide that carried the ‘blue ripple’ this past November 6, 2018 recedes, a critical challenge revolutionaries face is whether that project of a ‘party within a party’ is viable and can accomplish anything of lasting value. Certainly a failure to address the unfinished Second Reconstruction will guarantee its defeat.

4 thoughts on “Democratic Socialists of America and Black Liberation”