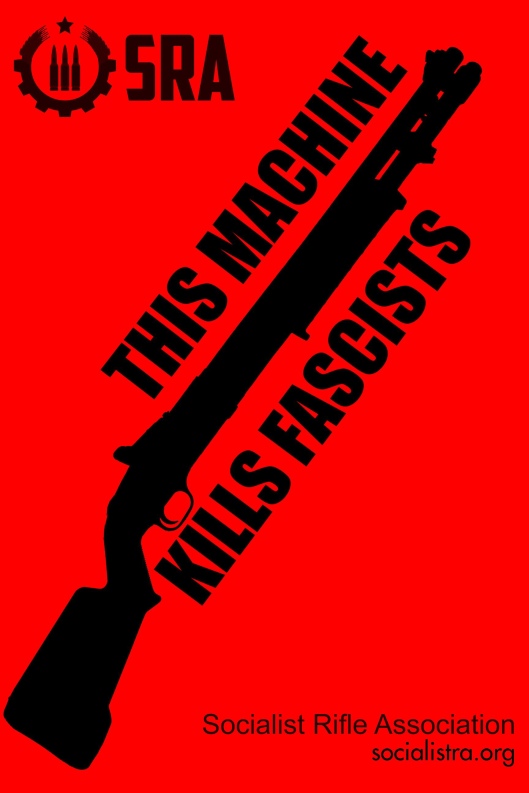 For many radicals firearms have no place in the home, nor the streets. They will not have a meaningful role in the revolution, either. For these radicals if revolution is even possible it cannot have a violent component because the state has an overwhelming monopoly on all forms of violence. They are just too powerful. Revolutionaries stand no chance with firearms, much less any other forms of direct action. Besides, we are making great headway in the ‘hegemonic’ struggle, and have but a few more key institutions to capture before the discursive discourse discussed divides the ruling class and we flow into the vacuum that results. We ease into the state, after a long period of leaning into it, until it warms up to our embrace. Or something like that.

There is also the fact that guns are used within poor Black and Brown communities to kill poor Black and Brown people, too often at the hands of other poor Black and Brown people. So guns need to be restricted, more heavily regulated, so as to save lives. That’s a persuasive argument, and makes sense, in a narrow sort of way, as bourgeois policies and the ‘issues’ they reflect so often do. The reactionary character of the firearms industry is also obvious. So guns and gun violence are reprehensible. They are morally and strategically a dead end.

The David Hogg approach, with a focus on the spectacle of school massacres, is a politically vacuous and celebrity centered mess that has no place in our movement. Democrats excel at this nonsense, with endless proposals about reduced gun capacities, background checks and regulation–and lots of tears.

We socialists point to the social and economic conditions that drive the use of guns–poverty, exploitation, domination–and the importance of the violence of everyday life in conditioning the violence of the gun in the streets. This context makes gun use perfectly reasonable. It follows a logic that is inescapable. It is impossible to understand gun violence without an understsnding of capitalism and its antipode, socialism. Allow me to explain.

Within poor communities the informal (illegal) economy is by definition outside of and stands in opposition to the legal system. It’s illegality is enforced by cops and courts. If you are engaged in the purchase, sale, distribution or consumption of illegal goods and services there is no way to safeguard your activity by recourse to the ‘protection’ offered cops, nor the ‘justice’ of the judicial system, save the ‘corruption’ of each, which amounts to a distinction without a difference. One must rely on other means, e.g., superior force, to ensure the safe and successful completion of a transaction. A gun is first and foremost a weapon that extends deadly force beyond arms length. It is, in its basic form, a radical extension of an arm and the fist at the end of that arm. It is a form of potentially lethal violence, small in size, easy to use, and in most respects superior to comparable forms of protection and assault. Hence, ‘you don’t bring a knife to a gun fight’.

So here’s the thing: To argue for the elimination of guns from poor people who make their living in the so-called ‘black market’ is to also effectively call for disarming those economic actors and leaving them to the tender mercies of their armed trading partners. Without addressing this aspect of gun control, all policies to restrict gun rights risk raising the costs of securing that protection and prescribing behavior that is irrational, even suicidal.

Of course if you are a patrician socialist, the ‘lumpen proletariat’ is by definition reactionary, and probably all wife beaters, so this is a non starter. They are all ‘criminals’ rather than ‘citizens’.

If you are a wild-eyed lunatic fringe socialist, like me, being down with the homies is a prerequisite to being a socialist. The two are inseparable.

While not specifically about gun control Louis Proyect, the Unrepentant Marxist, with whom I frequently disagree, gets it right when he writes the following:

“The mounting assaults against working-class interests will inevitably lead to neighborhoods or entire cities forming their own self-sustaining institutions and defending them by force of arms. By then, parliamentary style elections will have outlived their usefulness. It will be the hour of the American socialist revolution. I understand that for most people used to the meaningless bourgeois election circus this will sound like science-fiction. Maybe so but history has a way of sharpening the contradictions that make all this very real.” (From “Left Strategy for the 2020 Elections and Beyond: a Critique” April 29, 2019).

Following Proyect above, the logical extension of his argument, with which I wholeheartedly agree, is best exemplified in the Socialist Rifle Association, to which I proudly belong.

In this sense the solution to gun violence is the Socialist Rifle Association and their motto, ‘Arm the Working Class!’

Parenthetically, the homies are workers, in and outside the formal economy.

That and those “neighborhoods” and “self-sustaining institutions” that Proyect wants us to defend must include the fabulous homes and workplaces of the rich, which must be occupied by us, because they belong to us, always and everywhere. After all, if our revolution only involves defending our shitty neighborhoods and the scraps we are forced to subsist on, what’s the point?