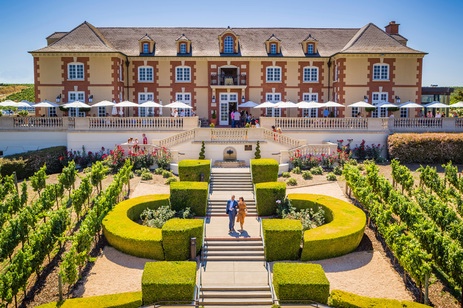 Such a strange mixture: Eucalyptus, palm and pine trees. This blending of old and new worlds, south and north, afforded by a most temperate clime, is a theme of Northern California wine country.

We can develop this theme well beyond flora.

The precise, computer rationalized and seemingly endless matrices of grape vines suggest progress, only to be disrupted by the altogether incongruous appearance of desperately poor and exploited farm workers, their bent backs evoking the cotton fields of the antebellum South, the rice paddies of Asia, the banana and coffee plantations of Central America, and the corporations and death squads that still rule so many of them. Little distinguishes this agricultural-industrial abomination, at least in its effects upon the poorest among us, from its obvious precursors.

The huddled port-a-potties an unintended admonition of the condition of the wage laborers that prop up the political economy of wine country.

Soon the grapes will make some room for endless rows of marijuana plants. The crops may vary; the port-a-potties are eternal.

Likewise the segregation between rich and poor, dark and white, so omnipresent as to be invisible, is a remarkable testimony to the continuity in forms of domination. There is virtually no mixing of social classes in Sonoma or Napa, and less upward mobility, only a seamless segregation reigns, the material base of a faux diversity no less a myth than those proffered the benevolent despotisms of yesterday.

So too the lavish estates of today, with names like Domaine Carneros and Chateau St. Jean, call to mind the landed aristocracy of France. This nod to the old world is found throughout the language of wine country. ‘Meritage’, a neologism coined by a plantation master with the name of Mondavi, is a clever linguistic transversal of the two worlds. To the novice it is pronounced “mer-i-tahzshe”, as a word of French origin might be. But it is not pronounced that way, rather as the word “heritage”. The confusion is by design, I think, so as to elicit a correction by an enthusiastic initiate, enhancing the prestige of the brand by way of deeper discussion.

However the wine is pronounced, farm workers can’t afford it.

In wine country the Kentucky Derby is celebrated without an ounce of irony, single vine varietals next to Mint Julip’s, parasols and wide brimmed hats flapping in the breeze, white leisure suits tended by servants at beck and call. All invited to the party wax nostalgic and are enthralled with that other breeding they are so in love with, that of an equestrian nature.

No surprise then that the ‘industry’ of grape cultivation also cultivates the most despicable values and social mores of an aristocracy, or Slaveocracy, even if they think of themselves as ‘cosmopolitan’ or celebrating the ‘modern South’.

But their ‘global culture’ is the damnable culture of a ruling class that steals everything, then forces us to reassemble it as a pastiche of conspicuous consumptions flaunted as the spoils of the class warfare it relentlessly prosecutes, yet denies.

Farm workers eat mangos and flavored ice from humble roadside stands, bittersweet reminders of how far away lie their homes and loved ones.

Wealthy oenophiles line up by the thousands at spittoons–a sure sign of a ‘healthy’ economy.

I agree, if we want economic development, let’s line them up.