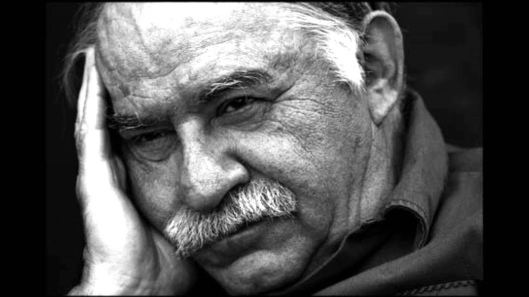 Anarchists are often at their best when they critique communists for unhealthy admiration of order and authority. This tradition is captured in the term of abuse “tankie”, which is anarchist shorthand for a communist who does not shy from bringing out the tanks to crush rebellion, like those deployed during the Hungarian Uprising of 1956 and the Prague Spring of 1968 in then Czechoslovakia. Murray Bookchin, a social ecologist, and philosopher of libertarian municipalism whose writings continue to animate leftists from Rojava to Seattle, often wrote with a profound contempt for the more authoritarian traditions found in various expressions of Marxism and socialism. If he were alive today, he would not be a “tankie”. As an anarcho-communist, I am sympathetic to many of his views. For instance, the quote below is an effective broadside against the kind of Marxism that needs cops, commissars, and soldiers to keep everyone in line. 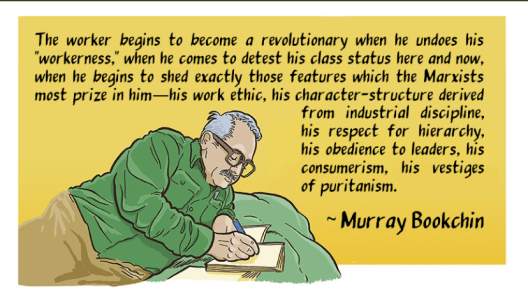 That’s great stuff. But there is another Murray Bookchin, a writer who, for whatever misbegotten reason, was a featured speaker at the 1978 national convention of the Libertarian Party USA in Boston, Massachusetts. The following year the party nominated the billionaire David H. Koch for Vice President. You can look up Bookchin’s presentation online. It is not his finest hour. He also contributed this to a right-wing journal.

“There was a period of time, indubitably, in Jefferson’s time, when the farmer, the yeoman—the American yeoman, standing on his land with his musket—represented a forward step for individuality. But today the millions that flow in and out of New York anonymously, through mass transportation, through the tunnels and over the bridges that lead into and out of the suburbs—these are among the most de-individualized people I’ve encountered in 57 years of living. Most of them are organization men and women and have become denuded of all personality and uniqueness. They’re figments; they’re creatures, in fact. They’re creatures of the mass media and of the corporate world that has rendered them totally homogenized and anonymous. Now already the attempt to preserve what we in America would call private property, the rights of US Steel and the rights of General Motors, has become literally a step in the direction of the de-individualization of the American people and their reduction to masses.” (Interview with Murray Bookchin Reason Magazine 1979.)

I have long maintained that libertarianism in the United States constitutes a deep reservoir of reaction completely antithetical to anti-fascist praxis. Together with Christian nationalism, American libertarianism functions as a political pipeline that transports the raw material of white reaction to the toxic refineries of 21st-century fascism. It has always had its center of gravity in the American South, where fetishes for private property and “individual liberty” run through so-called “states rights.” The entire philosophy and praxis of libertarianism are anathema to revolutionary anti-fascism. There is no bargaining with it, cozying up to it, or riding alongside it that doesn’t involve the wholesale betrayal of our principles.

That yeoman farmer was also a white settler, a slaveholder, a nascent bourgeois individualist, and a colonialist monster. This abstract individual is favorably contrasted with a de-individualized, homogenized, and anonymous “creature.” This contrast between the agrarian individual and the urban masses –New Yorkers in particular — between the inherent worth of the individual and the mind-numbing, worthlessness of the masses is not a part of any anarchist tradition I am very fond of. In fact, I find it repulsive. I am familiar enough with Bookchin’s later work, when he attempted reconciliation between Marxism and anarchism, to know this is not representative of his entire corpus. Perhaps he clarified such comments elsewhere? In any case, I think efforts on the part of leftists to find “common ground” with organized libertarianism are at best misguided and at worst potentially fatal to our revolution. Our time is better spent reconciling anarchism and communism, a project I think possible and worthwhile.

My problem with Bookchin is similar to my problem(s) with the late Alexander Cockburn. While Louis Proyect, the “Unrepentant Marxist” has posthumously conferred upon him secular sainthood, I’m less inclined to exalt Cockburn. His frequent attacks on the anti-racist liberal/left are now a matter of historical record; so too his veneration of the tea party as a welcome riposte to liberal identity politics. But he was blind in the white eye; he couldn’t see the bigotry at the heart of the Tea Party as anything other than unfortunate, and irrelevant, a holdover from another era. How wrong he was. As someone once noted: The past isn’t dead; it’s not even past.

One can find much in the vast body of work of Bookchin and Cockburn that is important to uphold today; there’s also a great deal there that was crap in the 1980s and 1990s and has only gotten stinkier with time. Had he lived to see the election of Trump in 2016 to the U.S. presidency, can anyone seriously doubt where Cockburn would now stand on the so-called ‘populist right’? I’m pretty sure that his anti-anti-racism and warm feelings for the so-called right-wing populists of the Tea Party era would have propelled him to make arguments similar to those now being made by Crystal Ball and Glenn Greenwald about the desirability of a right-left realignment across “populist” lines. That’s a fool’s errand.

Cockburn and his ilk could not grasp racism as anything other than labor market competition and a cynical ploy foisted on the white working class by clever elites. But racism has always been more than that, and always at the center of ruling class command and control in the United States, a structural feature of American capitalism and empire. It is a fundamental pillar of inequality, not a vestige of a bygone era.

All socialists, anarchists, and communists, whether of the “tankie” or “insurrectionist” varieties, are simultaneously anti-racists and anti-fascists; or should be. Any fundamental, lasting, and desirable change must run through Black liberation. That’s partly why we chant, “Black Lives Matter!” The other reason being, of course, that for so many people, Black lives so obviously matter so little, if at all.